We’ve enjoyed an impressive harvest from a very small and unkempt patch of fava beans again this year.  i just love these beans!  They’re so delicious mixed salad-style with cherry tomatoes cut in half. 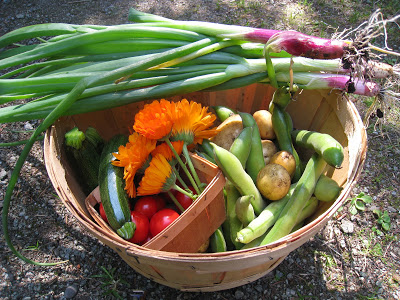 …and with new potatoes, onions, zucchini…anything you have growing in your garden at the time, really….because whatever grows together goes together! 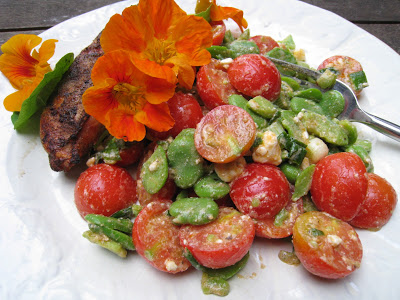 I like mixing in a bit of feta cheese too but even if you’re not vegan, sometimes they’re more delicious when you leave out the cheese.
Favas are so good mixed with a grain and all that veg and herb too.
Tonight I’m going to make this simple and yummy sounding recipe and I’m gonna use shoot salad mix instead of the mesclun greens. yum yum. can’t wait. 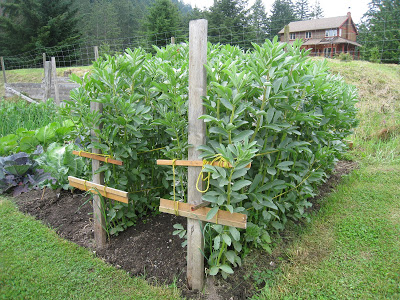 Look at this beautiful fava bean stand I saw while cruising the home tour on Mayne Island on this year’s July long weekend! Isn’t it positively inspiring!?  I will really have to get serious about taking better care of my favas! 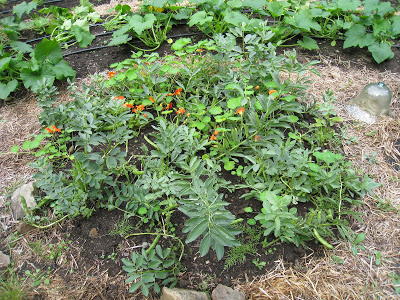 Look at my little patch.  tee hee!  all the plants are spindly and lying down on the ground mixed in with nasturtiums and weeds…..what a lesson for me!….an example of how sometimes it’s better to do something not very well than to not do it at all. 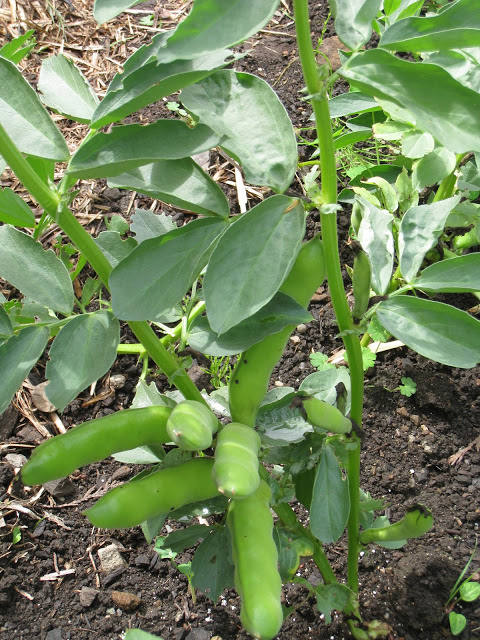 …because look at those beans!!
They’re often thought of as a spring crop but maybe because our summer was cool to start and they were planted where they get some afternoon shade, they’ve been producing all summer. 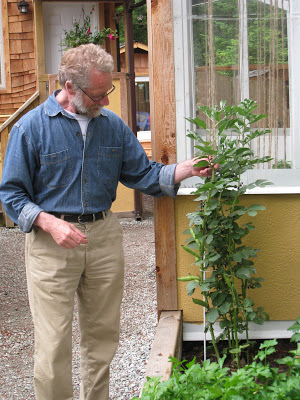 Here’s Mayne Islander Brian Crumblehulme showing us a fava bean plant he planted with seed that was given to him by a woman who’d gone to Egypt recently. (his awesome handbuilt-by-himself home and garden was on that tour in July too.) The seed had been found in an Egyptian tomb.  Apparently dried fava beans are often found in Egyptian tombs…and they still germinate!  wow.  In England, the fava is more commonly called a broad bean but I learned it’s also known as the Egyptian bean there too.  These days in Egypt, the dried bean is often eaten at breakfast time.  Interesting!  Thanks Brian, for telling us the story of your bean plant.  He’s planning to save seeds!  He says they’re an interesting black and red colour.  I really enjoy reading Brian’s gardening writings in our Island Tides newspaper.….so you might too.
…and you might also want to plan to grow some fava beans next year too!  For simple inspiration, here’s a nice idea using pea shoots (yay peashoots!!)  Those photos make me feel like I can almost taste the good-for-ya deliciousness, just by looking.

Christina’s Garden is a small market garden on Mayne Island, one of the Southern Gulf Islands located in the Salish Sea between Vancouver and Victoria, BC, Canada.

We put love and care into producing a variety of delicious and nutritious shoots and microgreens for year round sales to Mayne Islanders and folks in Victoria and on the mainland. We also offer a variety of home grown vegetables, seasonal flower bouquets and bedding plants for home gardens at our roadside stand and the Saturday Market on Mayne Island.

I like to grow food and flowers so we can use them to make our lives delicious and beautiful.