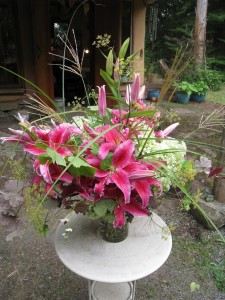 The stargazer lilies have been blooming again this August and they are, as usual, stunning!!
Stargazer lilies are the look-after-themselves perennial treat of the late summer garden just like peonies are the look-after-themselves perennial treat of the early summer garden.  After I plant them, I don’t have to do anything….they just come up on their own year after year, looking awesome.  Such a smart investment for a cutting garden. 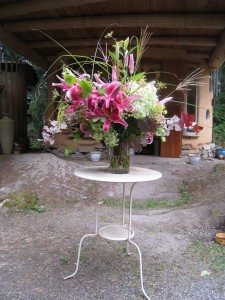 This arrangement was made to fill an order for a special wedding anniversary.  In with those gorgeous lilies, I mixed limelight hydrangea, grapevine and grapes, golden hops vine, fennel flowers and grasses, all found in the garden at this time of year.  Yet another example of “whatever grows together, goes together”! 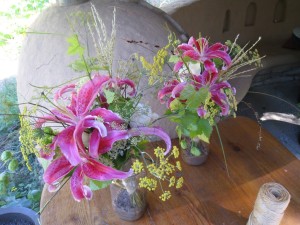 Some stargazer bouquets that I made last weekend for a bride and her maid of honour.  They wanted something not too big and crazy yet still special and also natural and a bit wild looking too.   These have almost the same plant and flower material as the large anniversary arrangement, just a lot smaller.  I think they’re beautiful and they seem to have what I think is an ideal feel for a Mayne Island wedding. 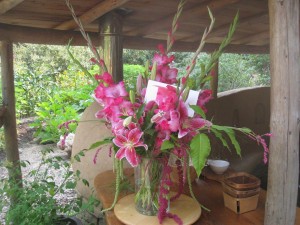 Here the lilies are mixing beautifully with pink and green flowered gladiolas, amaranth (green tassels and love lies bleeding) and polygonum (kiss me over the garden gate).  This was a special order for a honeymooning couple 2 or 3 summers ago. 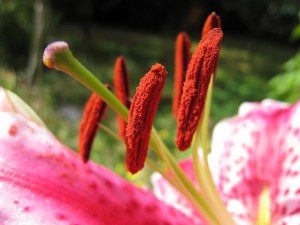 When I use these lilies for arrangements, I remove the anthers from the filament of the stamens because they are full of a powdery pollen that stains like crazy when it gets on your skin or on fabric.

On days when I’m working with these beauties and I’m too lazy to bother to get my gloves when removing those anthers, well, I end up looking like a chain smoker who rolls her own. 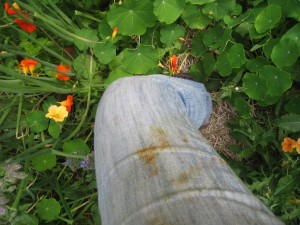 oh great, now it’s on my jeans….if you ever get this nasty stuff on your clothes never wet it!!  The best way to deal is to try to pick it up off the fabric with sticky tape, or try to blow it off and I’ve also heard that placing the stain in the sun does wonders too.  Water, it seems, sets it into the fabric and it may never come out after that.
Apparently, removing the anthers makes the flower last longer too….. 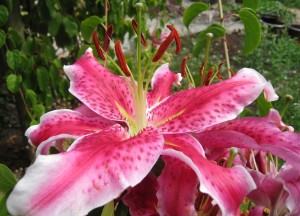 Anyway, I wish I didn’t have to remove them for arrangements and bouquets because I think they are a most amazing part of the whole design of this gorgeous specimen (they look naked without them!)….but, at least we can enjoy them intact on a stroll through the garden.  Just don’t get too close and brush up alongside them! 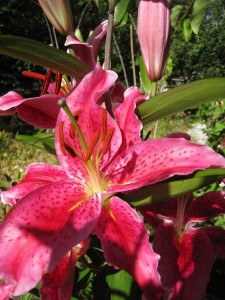 hmmmm…have I mentioned the fragrance?
out-of-this-world.

Christina’s Garden is a small market garden on Mayne Island, one of the Southern Gulf Islands located in the Salish Sea between Vancouver and Victoria, BC, Canada.

We put love and care into producing a variety of delicious and nutritious shoots and microgreens for year round sales to Mayne Islanders and folks in Victoria and on the mainland. We also offer a variety of home grown vegetables, seasonal flower bouquets and bedding plants for home gardens at our roadside stand and the Saturday Market on Mayne Island.

I like to grow food and flowers so we can use them to make our lives delicious and beautiful.